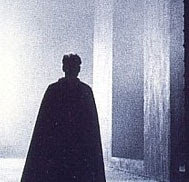 Entrances and exits in culinary experiences

If you've seen the Kenneth Branagh film of Henry V, you might remember the young King's first entrance. He enters, clad in a huge cloak and crown, through a pair of high double doors and backed by a blinding corona of white light. It is like the second coming.

When Judi Dench, playing Mistress Golightly, saw the shot, she is supposed to have said "My God, what an entrance. Who do you think you are?" Flustered and probably feeling very young in the presence of a Grande Dame of British theater, Branagh allegedly replied, "Well, it's not called Mistress Golightly the fifth!"

I was reminded of this recently when I was doing a show in the function room of a top class hotel. Of course, most function rooms have a kitchen or service station located just next door. After all, it makes sense to have the culinary resources close by.

Now, the problem here is one of entrances and exits, and especially of lighting. Those top-class function rooms have usually been expensively illuminated with crystal chandeliers, candles and subtle indirect lamps - while the kitchens are lit with bright white striplights.

The result? When the Star Trek kitchen doors open, every eye is drawn to them (we look to the light - a fundamental law of experience design) and we see... Klaus the Underwaiter, backlit in his majesty like Harry V. And behind him? Piles of dirty plates, flustered waiters, buckets of food waste and the sous-chef screaming at the saucier.

In creating atmosphere, nothing is more important than light. And nothing kills atmosphere faster than cold, hard, white light, especially when it draws our attention to the machinery of the show.

Of course, waiters are in a difficult place, as they have to switch constantly between showmanship, and being invisible. Nevertheless, the problem here is, well, glaring.

The first step would be to get rid of that intrusive light, either by installing more doors or baffles (wings, anyone?) or by simply changing the dang lighting strip to something warmer.

The second, more exciting step, would be to use the grand entrance effect, and decide which moments deserve the Henry V treatment. Imagine the lights going up and the whole waiting staff marching in in unison with the magnificent main course under silver covers... You could add (flavourless) smoke and a fanfare if you wanted.

"Who the hell do you think you are?"
"Why, just the best damn supper in town."
Posted by Adam StJohn Lawrence.

Awesome blog. I enjoyed reading your articles. This is truly a great read for me. I have bookmarked it and I am looking forward to reading new articles. Keep up the good work! Impact Resistant Sliding Glass Doors

Such a very useful article. Very interesting to read this article.I would like to thank you for the efforts you had made for writing this awesome article. No-cry sleep coach