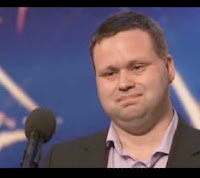 The art of lowering expectations

The Blog-o-Sphere is going crazy for this guy. If you've not encountered him yet, he's Paul Potts, a Welsh cellphone salesman who turned up on a TV talent show in a cheap suit, with a bad haircut, and the facial expression of a freshly beaten puppy-dog. "Aw," we all thought, "a valiant loser", and prepared to cringe.

Then, he did this.

Oh my goodness, goodness me. And yes, you are seeing a professional TV presenter in tears.

Now I do not want to take away from Paul's gifts at all. He has a terrific voice, and a unique star quality. The record labels are lining up to sign him, and I think he will do very well indeed. But his gutsy musical performance was not the only reason that the crowd went crazy.

Deliberately or not, Paul massaged the crowd's expectations downwards before he started to sing. His appearance, his manner, and most especially his self-demeaning expression caused us to file him under "mostly harmless". Then, when he did a very good job, he blew us away by exceeding our expectations so thoroughly.

It's an old showbiz trick, seen in it's simplest form when the juggler drops a ball during an early, fairly simple part of his routine. Later, when he is juggling the six razor sharp knives we are all thinking back to the dropped ball and expecting disaster. But of course, the dropped ball was a deliberate play, lowering our expectations to make the later material seem more impressive.

I've even used it myself - starting a stage musical with one guy thrashing gamely away on an ill-tuned piano. You could sense the audience thinking "Oh God, two hours of this?" just seconds before the fake backdrop fell and the (previously hidden) professional rock band blew in on the twelfth bar... 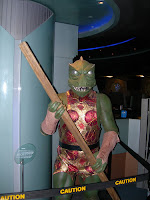 I've talked a lot about what I call the Boom-wowowow-BOOM! dramatic structure in various posts. One way to really make the first eye-opener hit home is to briefly lower customer expectations just before things get really good. Then, when you hit 'em with both barrels, the Boom! effect is even more pronounced. (A great example is the Star Trek Experience in Vegas, with it's purposefully cheesy opening set-up.) It's a combination of two factors - heightened contrast between our low expectation and what we finally get, and the simple tension release that comes from things turning out better than we feared.

So, deliberately lowering expectations is a highly effective technique to use in any experiential offering. It's also a bold one, as it can easily go wrong if the customers walk out before you turn the corner. Just make sure that your audience is already committed to staying more than a few seconds (or is unable to leave) before you start to scare them with carefully rehearsed amateurism...

And also make sure that you still are authentic. I guess, that was what struck me most about Paul Potts: he IS authentic to the bone.

Another thing which adds to the effect: he chose the right stage as well. Just think of it - an opera singer amongst a broad variety of entertainment disciplines. I guess, there's a lot more bands, dancers, comedians or performers out there on the amateur/aspiring hobbyists circuit. But how many just-for-fun opera singers do you know? He had to stick out, hadn't he?

He is a phenomenon :)

I'm not surprised he won the competition :)

Markus - good point. His audience (and even ths jury) there had certain preconceptions about what opera is, and what amateurs do to it. His response from a more operatic audience would have been positive, for sure, but probably less ecstatic.

Vladimir - yes, that pleased me too. I heard him on the radio being asked how it felt going from salesman to millionaire "overnight". :)

That's another showbiz technique right there - keeping all the hard work in the background (or offstage), so people just see the magic and think it is a miracle...

This is exactly what happened with Susan Boyle, the woman on Britains Got Talent: http://www.youtube.com/watch?v=9lp0IWv8QZY

I hope she can be as successful!

Definitely, it's always inspiring to see someone succeed like that.

And I'm glad you enjoy Humor That Works, I've added your blog to my list of links as well.

The level of expectation for a business will be set by your price point which makes this an easy exercise for say a low cost airline.

Customer service can be basic, you can charge people to go to the toilet but if during the customer's experience you throw in a free drink - they'll remember that!

Thanks Drew, I continue to get a lot from your blog!

Thanks Elizabeth! The price is one powerful way (though not the only one) to set expectations. And you use a great example with low-cost airlines. They have so many opportunities to differentiate, and this is a great one.

Great article with some worth sharing information. Now if you want to really access your life, then you can understand his feeling. It may be a little confusing for some members